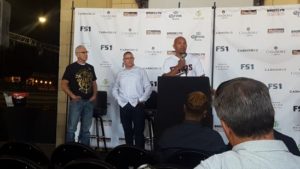 Caleb Truax, eager to be back in the ring at the Minneapolis Armory. Trainer, Ron Lyke, Left, and Tony Grygelko.

Truax answered questions from the press about the upcoming fight and about his recent rematch loss to James DeGale, from whom he rested the super middleweight title with a stunning upset last December. He admitted that, of course, he’d love to avenge that loss but is absolutely not looking ahead of August 24, when he plans to put on a great show in front of his hometown. Truax, now    29-4-3 (18 KOs), will face Brazilian light heavyweight Fabiano Pena, 15-10 (11 KOs), who fights out of Chiapas, Mexico.

In response to a question about his preparation for his last fight, Truax said it was actually the best training camp he’d ever had and he just had an off night. He’d been cut badly from constant head butting by DeGale, but he has healed well. That fight was very close. Truax has an opportunity now to re-establish his momentum and put himself back on track for another shot at a world championship. 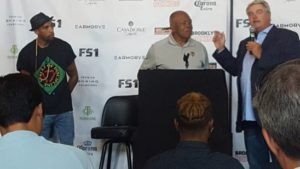 James was introduced by Minnesota Twin’s legend Tony Oliva, a longtime family friend. Oliva praised James, who headlined last April’s night of boxing at the Armory with a well fought decision over rugged veteran Abel Ramos, solidifying his place at the top of the welterweight division, putting him a step closer to the coveted shot at the welterweight championship of the world. One of the nation’s top amateurs as he grew up training in South Minneapolis at the Circle of Discipline on East Lake Street at 12th Avenue, James still trains at the neighborhood gym. He will go away to a training camp in Barnum, MN to prepare for this fight. James’ opponent has not yet been named.

Also expected to appear on the August 24 card is junior middleweight VeShawn Owens, 9-1(9 KOs). A former U.S. Amateur champion, Owens will be getting back on track after his first professional loss in April at the Armory. Owens is a solid, strong boxer with a fearsome punch and a crowd pleasing style. These three boxers, along with the rest of the card put together on the PBC promotion, is sure to bring a night of excitement that will be the highlight of the summer for Twin Cities sports fans.