Super welterweight Tim Tszyu survived a knockdown in the opening round of his American debut against veteran Terrell Gausha, recomposing himself and taking control in a long, competitive battle, gaining momentum and enegry with each round on his way to victory.

Tszyu, the son of  former super lightweight champion Kostya Tszyu, traveled to Minneapolis, Minnesota from his hometown of Sydney, New South Wales, Australia with a record of 20–0(15 KOs) against Terrell Gausha’s record of 22-2-1(11 KOs). 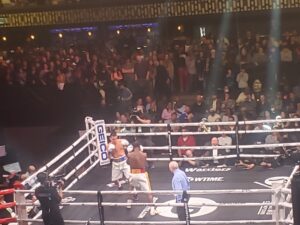 Tim Tszyu (L), battles Terrell Gausha in a 12 round super welterweight fight at the Armory in Minneapolis.

In the opening round, Gausha showed he came to fight, beating Tszyu to the right hand with his back near to the ropes as the advancing Tszyu tried to land his own right. Tszyu rose to reengage and soon blood could be seen streaming from over the left eye. The cut turned out to be on his head, apparently from an accidental headbuttt. Fortunately for Tszyu, the cut was taken care of immediately by his corner and was not a hindrance to him.  In the second round, the crowd started the “USA!” chant in support of Gausha and the chant reemerged a few more times in the fight, but it never quite rallied Gausha into dominance. Gausha presented a flat-footed, stand-still style with hands high, working his jab and throwing shots to the body. 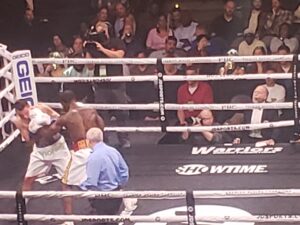 Terrell Gausha (R), put forth a valiant efort, but there was no stopping Tim Tszyu, who won a 12 round unanimous decision.

Tszu kept coming forward, working combinations and trying to find openings. Gausha sat down in his stance and began moving more smoothly in the 4th, appearing to control the pace with his jab as he landed punches. However, Tszyu began having an effect on him with his determined pursuit, catching him with damagaing shots on the ropes for the last third of the round. Early in the 5th, Tszu caught Gausha with an overhand right that wobbled him, then pounded punches off of him as he covered up on the ropes. By midround Gausha was landing punches back effectively, still fighting off of the ropes. The fight kept moving in Tszyu’s direction over the next five rounds. By the 10th round, Tszyu appeared to have taken control of the fight. There was plenty of back and forth, but Tszyu seemed to be doing the most damage, keeping Gousha on the ropes most of the fight. Gausha gave a valiant effort in the 12th round, but it appeared to be too little too late. He was never in the kind of trouble that could end the fight and he kept it competitive to the final bell. Tim Tszyu won a unanimous decision, scored 114-113, 116-111, 115-112. 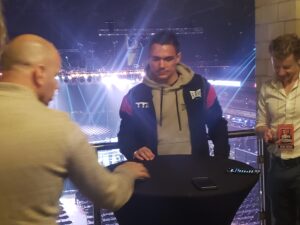