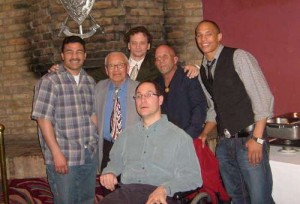 Next Monday, May 9, I will be the 2022 Boxing inductee into the Saint Paul Sports Hall of Fame at Mancini’s Char House. It is a humbling honor to be included in the select group of St. Paul athletes recognized since the Hall of Fame’s establishment in 1985. I am grateful that, among the boxers and trainers who helped and encouraged me since I began boxing at age 10, most of those still alive will be there. Interestingly, many of those men, as well as two of the three trainers now departed, are also in the Hall of Fame. I’m really going to enjoy it.

At the end of last summer, internationally known professional referee and judge, Denny Nelson, informed me that I’d been nominated. Then, early this year, he told me I’d been chosesn. Denny Nelson was referee for my first fight when I was 10. I represented the Mexican American Boxing club on a card at Harding High School in January, 1980. I won a decision over Chris Ness of Litchfield in the 65-pound division. Mark Nelson, Denny’s son, refereed a good number of my fights in my late teens and early 20s. Both of them are in the Hall of Fame. Also in the Hall of Fame are Emmett Yanez, my first coach and the founder of the Mexican American Boxing Club, along with Bobby Zamora and Dale Jackson, both of whom assisted Emmett. My neghborhood hero, Marco Morelli, four year s my senior and nationally ranked at age 14 when I was a 10-year-old beginner in the gym, is also in the Hall of Fame. Jay Pelzer, head coach through the 1990s at the Rice street Gym. is in the Hall of Fame. My teammate at Rice street and roommate at the 1987 Nationl Golden Gloves in Knoxville, Tennessee, former IBO junior welterweight champion of the world, Jay’s nephew, Mike Evgen, is in the Hall of Fame. Another boxer, 2018 inductee Mike Monette, was also from the Mexican American Boxing Club. Among the 36 previous Boxing inductees, 25 are men I personally know and about whom I have a story to tell. Some of them have departed to their eternal reward and I really miss them. I really wish we could have talked one last time, had a chance to hang out for another 3 minutes, before that final bell rang.

That’s what I wish to do—-to savor the moments with those who make St. Paul Boxing what it is, as well as everyone celebrating this Hall of Fame, in each of the sports, from the Mancini’s who sponsor the Hall to the inductees and their supporters—-making the most of this gift until the last round is finally fought.