Boxing last May in Reno, future fights this August in Minneapolis 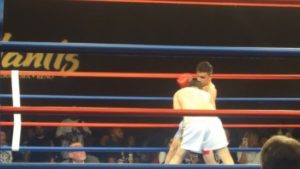 Ricardo Sandoval, fighting off the ropes, on his way to a unanimous decision over Oscar Vasquez in Reno.

Occasionally, working with recreational boxers through Fighting Chance/Boxing For Life takes me to other states, affording the chance to see other boxing scenes.  On Friday, May 4, after nearly two months of heavy work with a client in Reno, NV, I had the chance to attend a night of professional boxing hosted by the Atlantis Casino at the Reno Convention Center. I was hoping to see Ricardo Lucio Galvin in his third professional fight. I met Ricardo and his father, Ricardo, Sr., at Elite Boxing Gym in Sparks in 2016, before he turned professional. Unfortunately, there was no opponent available for him, but it was an entertaining card featuring some outstanding local talent as well as promising fighters from out of town.

In the Let’s Get It On promotion, Flyweight Ricardo Sandoval of Rialto, CA improved to 13-0 (1KO) with a unanimous decision over Oscar Vasquez of Sun Valley, NV in an action packed 8 round super flyweight fight. Vasquez’s record fell to 15-1. The fight was actually competitive and exciting, but Sandoval clearly had the advantage from opening to closing bell. There was plenty of punching throughout, and Vasquez did put up a valiant effort, but he couldn’t seem to take a round from Sandoval as the night went on. Sandoval moved brilliantly, controlled the ring, and landed multiple combinations as he dominated exchange after exchange. 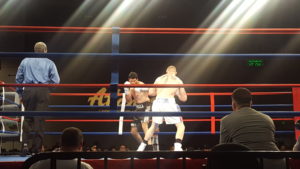 Blacke McKernan, foreground, on his way to stopping daniel Arambula.

Blake McKernan of Sacramento, CA, improved to 8-0 (6Kos) with a 3rd round technical knockout for the World Boxing Union (WBU) Cruiserweight championship over Daniel Arambula, now 4-3 (1KO) of Tlaquepaque, Jalisco, Mexico. Arambula was a clumsy mover with little boxing skill who bravely tried to make up for his lack of experience with a game heart. However, he was unable to avoid the stalking attack of McKernan. Strangely, McKernan exhibited a sort of tick, periodically shaking his head back and forth as if he were wildly answering “No” to an annoying question, while moving in on his opponent. He would then initiate an exchange he would invariably win, taking little punishment himself and going home with the early victory.

Entering into his third fight with a 2-0 record, Diego Elizondo of Carson City, NV, who can be found sparring on a regular basis at Elite in Sparks, stayed undefeated but had to settle for a majority draw against a smooth and clever Canton Miller of St. Louis, MO. While the rounds were close and competitive with Elizondo taking the first round by a point in my mind, Miller began making adjustments, including the occasional switch to southpaw, in the second. Fists flew on both ends and the fighters competed valiantly, both men reluctantly settling for the push, which is always better than a loss. Elizondo is sure to show fans more skill and determination in the near future, while Miller is scheduled of Yolandi Rhodate, 9-1-1 of Los Angeles, CA at Florentine Gardens, El Monte, CA, on July 20. (That bout is the scheduled semi-main event for the featured fight between lightweight Ray Perez, 22-10-0, Santa Rosa City, Laguna, Philippines, and Jesus Ageing, 5-6-2, Phoenix, AZ.)

Light flyweight Santos Vasquez of Sun Valley, NV made a game effort against Bryan Aquino of San German, Puerto Rico, but Aquino was too much for him, dominating the 6 round affair and coming away with a 59-55 decision.

In the opening bout, cruiserweight Frank Sanchez Faure, 7-0, a defector from Guantanamo Bay, Cuba fighting out of Las Vegas, NV, faced Lamont Capers of Hawley, PA. Capers was outclassed and heavily outsized and was obviously uncomfortable. He’d taken a few significant shots in the second after clearly losing the first round, but he crouched down on loose ropes to the left of his own corner to avoid a combination from Faure, and upon attempting to rise from the crouch tumbled backwards out of the ring to the floor, the official’s table not large enough to break his fall. I was in the first row of seats and the ring blocked him from my view, so I was unable to determine initially whether he was seriously hurt. After a lapse of time, Capers was helped back into the ring and was able to leave on his feet, thankfully. Making a very good and just decision, the referee declared a No Contest.

Truax and James Back in Action at Minneapolis Armory August 24

Former IBF super middleweight champion Golden Caleb Truax and word-ranked welterweight Jamal James will co-headline a Premier Boxing Champions promotion at the Minneapolis Armory on August 24. The promotion will be broadcast on FS! And Fox Deportes. A press conference is scheduled next Tuesday, July 17, 11:30 a.m. at Generals’ Hall in the Minneapolis Armory.

Truax is returning to the ring for the first time since losing the IBF super middleweight title April 7 in a close decision to James DeGale, from whom he’d taken the title with a huge upset victory in DeGale’s hometown of London, England last December. Truax’s performance was far below his level of excellence and he is sure to put on a great show in August as he climbs his way back to another world title shot.

James improved to 23-1 on April 13 with an excellent display of boxing skill to win a decision over world class Abel Ramos. Ranked number 3 by the WBA, James is looking to earn a shot at the welterweight championship of the world.