As we reach the middle of summer, I am enjoying the last quarter of my first year keeping an office in Element Gym, 655 N. Fairview Avenue in St. Paul. I’m here Monday through Saturday with weekday hours of 11 to 8, but often here earlier and later. It’s great having my own space for equipment and to write, as well as to speak with fighters and clients. I’m usually at my desk writing if I’m not working with someone in the gym or training myself. I can be reached at (612)369-3778 by anyone interested in boxing, be you a professional or amateur fighter or someone wanting to get in shape and learn self-defense. I’m working with Element owner Dalton Outlaw and trainer Michael Faulk weekday evenings and Saturday mornings with the amateur team and am otherwise open for one-on-one training. These three arenas—Amateur and Professional Boxing and Recreational or White-Collar Boxing—along with other gym related activities, are making this year very special. 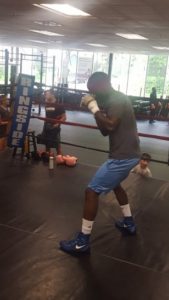 Ismail ‘Sharp Shooter’ Muwendo, at Element Gym, preparing to head back to training camp with Terrance Crawford in two weeks.

Speaking of professional boxers, I’ve been privileged in recent weeks to join local lightweight sensation, Ismail Muwendo and Element amateur super middleweight, Harrison Rund in a strength and conditioning workout. Muwendo has been coming here multiple times a week, putting in hard work. Harrison, who boxed well but came up short in this year’s Golden Gloves, joined Ismail some weeks ago. Ismail has been insisting I join the workout for some time, so I finally did and must say, it’s a killer one. While I’ve always been impressed with the body snatching Muwendo style, seeing him knock out multiple opponents with single smooth body shots, I’m more impressed with him now. He is a true world class athlete and his plyometric and resistance routine is as good and hard as any I’ve encountered. He regularly trains in Nebraska and Colorado with multiple weight champion Terrence Crawford, so as a trainer and a boxer I am very fortunate to work with him. One of the great gifts in the boxing brotherhood is when boxers workout together and share what they know, and this is one of those experiences that will aid me not only as an athlete just staying in shape, but also as a trainer who is always adding to his resources when developing fighters, not to mention working with recreational clients. As you see by these words, it’s something more to write about, too.

Ismail ‘Sharp Shooter’ Muwendo, was born in Uganda, where he had his first professional fight in 2009 before moving to Minnesota. His current record is 19-1 (12 KOs). Minnesota is lucky to have him and he has a great future ahead of him as he continues to climb the ranks of professional boxing. 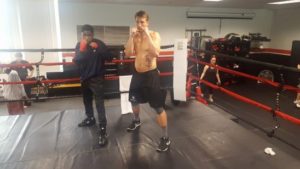 As summer moves on, one of the most enjoyable features of working out of Element Gym is the excitement of our amateur team. This week we’ve seen some excellent sparring among the crew of young boxers readying themselves for matchups on the amateur card scheduled for Doc’s Landing on July 21 in White Bear Lake. Brunette Boxing is organizing the card, which, like last summer, promises to showcase fierce competition among St. Paul and surrounding area boxers. We have boxers ranging in age and weight and teams will travel in from beyond the Twin Cities and maybe even nearby Wisconsin. The more competition like this the better. I wish we had more activity during summer months, but this and some events scheduled in August and September have me excited. Phil Sherman, who came up short with a very close loss in the finals of the Upper Midwest Golden Gloves heavyweight division this year, is preparing for the Doc’s Landing card. He also works as manager of the gym and teaches group fitness classes while helping with the amateur team. This was his first year in the Golden Gloves and he’s developed very well for the small level of experience he has. It’s delightful to see boxers like him and the younger competitors who populate the gym every day. Look to the pages of Boxers and Writers Magazine to hear more about him and them as the year goes by.

To learn to box, find a gym to continue your competitive career or find a trainer to keep you in shape, stop by Element Gym or give me a call at (612)369-3778.