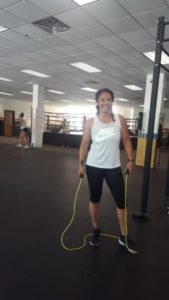 Smiling with jump rope, Mia ‘St. Paul’ Wanna will whip you into shape.

Mia ‘St. Paul’ Wanna grew up on the West Side of St. Paul and has been a personal trainer in the Twin Cities for the last few years. Her interest in sports and physical fitness began in early childhood and encouragement from her mother launched her down the road that, after a few twists and turns, lead to her current place as one of the excellent trainers at Element Gym.

When she was 5 years old her mom had her join the Boys and Girls Club track team that ran at Humboldt High School. She excelled in track events. During her high school years her family moved to Rush City, MN, where she added cross country running to her competitive endeavors. She ran the 100, 200, and 400-meter sprints in track and made the Varsity Cross Country team her freshman year.

“I went off the beaten path,” she said, as a young adult, straying away from sports. “As a runner I had this little dream that I’d make it to the Olympics but I didn’t pour myself into it , , , I always wanted to be a trainer, but I didn’t really keep it at the forefront. I wanted to play around, but once I turned it around later in life I found myself back in the gym, just fighting off some weight. I was going to the YMCA on the Eastside. I took the classes and fell in love with the classes and started to build a relationship with the instructor there. She encouraged me to get into their instructor course. I got certified as an instructor and started teaching . . . Once I stated preparing for my bodybuilding competition, then people started asking me to train them.”

Mia has been a personal trainer for the last three years. After watching her weight loss coach compete during the Mr. and Ms. Natural Minnesota bodybuilding competition, she got interested in competing herself.

Mia asked her weight loss coach if she could also do it and was told of course, it would be hard, but go for it. So Mia began training and entered her first competition in 2016. Then, by June, 2016, she showed up to Element as a personal trainer.

“I offer personal training, whether it’s one-on-one or buddy training. I’m also a group exercise instructor. I’ve really become a great fitness instructor. I’ve picked up a new certification, which is Barre, and just watching them progress from the beginning of class to the end—especially over the week, months, years—and also, I love in my personal training that someone can come to me and not really have much confidence about what they’re going to do in the gym and then pushing themselves to the limit and accomplishing their goals through my guidance and direction. It’s so rewarding, I just love it. Watching people break old habits and form new, healthy habits, it really just motivates me to keep going forward.

Mia was training for the May 5 Diva Classic in Duluth, but she held off on that competition and is concentrating on readying herself for the Minnesota Mayhem competition in Duluth this October.

The one message as a trainer Mia has is, “Whatever your goal is, whatever your vision is, don’t deny it, don’t think that you don’t deserve it. If you want it, you can have it.”

Available for one-on-one and group training.