James and Truax destroy opponents at Armory in Minneapolis 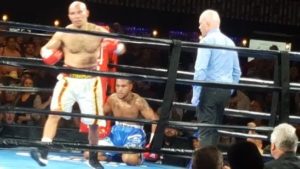 Caleb Truax leaves Fabiano Pena on the ground August 24, hopefully walking on to another world title.

The WBA number 3 ranked welterweight, Jamal James, delighted the hometown crowd of 3,574 at the Armory in Minneapolis on August 24 with an electrifying 2nd round knockout of veteran Mahonry Montes of Sinola, Mexico. James improved to a record of 24-1-(11KOs) and Montes fell to 35-8-1 (24 KOs). As the coheadliner, former IBF supermiddleweight champion Caleb Truax of Oseo knocked out Fabiano Pena, Orlando, FL capping off a great Premier Boxing Champions promotion with a slew of excellent fights on the undercard. 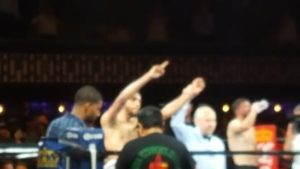 Jamal James stands triumphantly on August 24 after knocking out Mahonry Montes at the Minneapolis Armory.

James opened the fight with poised movement, controlling Montes with a long, solid jab, landing some good body shots and uppercuts. In the second round, as James continued with precision punching, Montes determinedly advanced into his combinations. James continuously followed his jab with long right hands over Montes’ left, following up with a left uppercut to the liver and left hook to the head. Following a double right hand with a left uppercut to the liver, stunning Montes, James threw another right uppercut to the head as Montes dropped to his knees and was counted out at 2:58 of the round. James has certainly sharpened himself to the highest level so far of his career and is very close to his first world title shot.

Truax fought Pena at light heavyweight, although he told press the night before that he intends to be back at supermiddleweight very soon and will campaign for another shot at the supermiddleweight championship as soon as he can get a title fight. He entered the ring ready for battle and wasted no time as Pena through haymaker lefts and rights that were easy for him to avoid. Truax took control from the opening bell, coming forward behind his left jab, landing good body shots. By the third round, having backed Pena to the ropes, Truax threw hard rights and lefts to the body behind a stiff jab with periodic bobs to the left and right until he perfectly placed a right uppercut between Pena’s gloves, landing solidly on the chin and dropping Pena to his knees. Although Pena did rise before the final count of 10, he was unable to continue.

This was a good return fight for Truax after his close, disappointing loss in April and he should be back in against stronger competition in the near future. James looked better than ever and he continues to improve as his star shines brighter every day.