On Saturday, November 4, I drove to Hawley, MN to be a guest coach for a day at The Gold Room Boxing Club. The club was started a few years ago by Minnesota boxing writer Ben Tighe. Frustrated with the need to drive his sons excessive miles three days a week to Fargo, ND to train, he was advised by Fargo coach Jesse Barbot to start his own gym. Although he’d never competed, Ben was persuaded by Jesse that he had been around Boxing enough to start the program, so the youth of Hawley now have a place to box, in the Garage of the Tighe household. 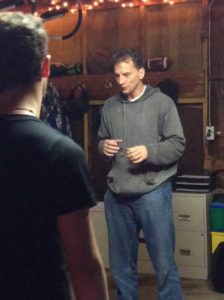 Nearly a four hour drive from St. Paul, Hawley is on Highway 10, roughly halfway between Detroit Lakes, MN and Fargo, ND. I was on the road just after 7 in the morning, arriving ten minutes before the Gold Room Boxing team began their workout. It was a good time and I was impressed with the determination and promise of talent I found among these young men, ranging in age from 11 to 17 at the Gold Room. Ben Tighe’s own sons, Sam and Zach, aged 13 and 11, were there, as well as Ben Burkel, 17, who showed good balance and speed with a lot of drive. Already a 3-1 boxer, he was preparing to compete on the Veteran’s Day Brawl Card the following week in Fargo. Also, Oscar De Felici, 17, and Marcus Rosing, 15 were there. These young men worked out hard and each showed his own promise as they begin to develop their individual styles. I sincerely wish them the best and am excited to see what comes of each of them if they continue pursuing the pugilistic life.

The Fight Doctor, Ferdie Pacheco, has died. https://www.newsday.com/sports/boxing/ferdie-pacheco-muhammad-ali-s-cornerman-dies-at-89-1.15006904 I first became aware of Dr. Ferdie Pachecho as a small boy when I was just falling in love with Boxing and he was a color commentator for television broadcasts of professional fights. He was born in Tampa, FL and after graduating from the University of Miami Medical School, he opened a private practice in Miami. He became known as the Fight Doctor because he was the personal physician and assistant cornerman for Muhammad Ali. Having met Ali while he was still going by his birth name of Casius Clay and began training in1960 with Angelo Dundee at the 5th Street Gym in Miami, Pacheco was Ali’s personal physician from 1962 to 1977, but advised Ali to retire after he won the devastating third fight, ‘The Thrilla in Manilla’ against Joe Frazier. Pacheco was rightfully worried about Ali’s health, and according to the Newsday obituary linked above, when Ali agreed to fight the hard hitting Ernie Shavers he decided to leave Ali’s entourage. Pacheco went on to be a famed color commentator and also was an accomplished writer and painter. Three of his books are Blood in My Coffee: the Life of the Fight Doctor; Fight Doctor; and Muhammad Ali: A View from the Corner. I am saddened by his death, although I’m not surprised because he was almost 90 years old. I regret having never met him, just as a few years ago I regretted never having met trainer Angelo Dundee before his own death.

The death of Dr. Ferdie Pacheco, who was so concerned about Muhammad Ali’s health due to the punishment Ali took while fighting some of the best heavyweights of the 20th Century, appropriately coincides with a social media post I saw from former professional fighter Jesse Barbot. On his Facebook page, Barbot posted the following message:

If you are a former pro fighter with over 10 pro Fights check out the website on this T Shirt and you too could participate in this study. They will fly you to Vegas with lodging at a top notch hotel. They will conduct several tests as well as an MRI at the Cleveland Clinic which is world renowned for Brain Health. They take great care of you and have excellent staff. If you qualify they will bring you down for four consecutive years. This is my first year and it has been a great experience!

The web site on the T-shirt is www.clevelandclinic.org/fighterstudy. If you or anyone you know can benefit from this study please contact Cleveland Clinic. Boxers and Writers Magazine issues a special thank you to Jesse Barbot for publicly sharing this valuable information.