Literary Pugilist no longer at rest

It’s time to publish another update on my return to the ring with further elaboration on why I choose to fight at this time. As I prepare to compete after a 19 year layoff since my last amateur fight, I’m inspired and encouraged by a man I met in New York nearly ten years ago. He is a man who turned professional in his 40s after learning to box in his mid -thirties; a man who made and lost a lot of money in the insurance business, was a college literature professor, and is now an accomplished poet; his autobiography, The King of White Collar Boxing, was published last year and his poetry collection, Lane Changes, was published in 2007. His name is David Lawrence. 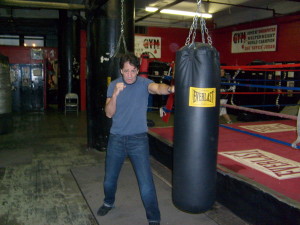 I met Lawrence while on a trip to New York to visit a Minnesota friend of mine who has lived and worked as a freelance writer there since the mid-1990s. I planned to follow that same path after my last fight, in the finals of the Upper Midwest Golden Gloves junior welterweight division in 1994. It’s safe to say the plans either weren’t concrete enough or they have just taken a longer, more circuitous route than I expected. But in late 2004 I had gotten permission from Lisa Bauch, owner of Uppercut Gym in Minneapolis, to mention her name while introducing myself to Bruce Silverglade, owner of Gleason’s Gym in Brooklyn. Bauch had gotten some training at Gleason’s Gym and some business advice from Silverglade on running her own gym. Silverglade introduced me to Lawrence because we are both writers and I have subsequently written articles about Lawrence on my White Collar Boxing and King of the Ring pages.

The one thing I really like about Lawrence is his belief in challenging oneself. That’s why at the age of 43, after having some amateur ‘White Collar’ boxing matches, he turned professional and had a total of six fights, finishing with a 4-2 record, all fights ending by way of knockout. “Which means I’m a tough hombre,” he said to me when I interviewed him for last year’s article on The King of White Collar Boxing. I strongly recommend that autobiography, in which he recounts his relationship with world class trainer Hector Roca and the media attention he got as an older boxer in the 1980s. I also recommend Lane Changes, in which he skillfully captures the drama of life’s transitions, much of it through the accurate portrayal of the boxing world’s atmosphere. But Lawrence also trains recreational boxers at Gleason’s now and can easily recognize true fighters when he sees them, understanding when a man has a love for boxing and the desire to box in his heart. I admire that about him and I appreciate his expression of it when I told him I would be fighting this month.

“Listen, Mark—” he said; “you’re a real boxer. You had a real amateur career. You’ve been training for this fight your whole life. Now you train hard and win.”

He’s absolutely right. Life is very strange sometimes. I could have done this many years ago but it so happens that through various circumstances I find myself ready to do it now. I have trained for this fight my whole life. I will be ready on October 19. I fully respect my opponent, Damien Hill, recognizing how tough he is and his athletic ability. I am thankful to God for the opportunity to demonstrate my skill publicly in the professional arena. Fans will see that skill on display and I will be victorious.