Among boxers representing the Uppercut Gym in the Ringside Products World Championship tournament August 15-20 in Kansas City, KS were John “The Big Jump” Keck and Rick “The Deadline” Lundstrum, each of whom competed for the first time ever in the Master’s Division novice class. The 38-year-old Keck, a former collegiate ski jumper who now works in the HR department of a Heating and Air Conditioning service company, entered the heavyweight division and plowed through opponents on his way to the championship match. Lundstrum, a 53-year-old editor of an online travel industry trade magazine, delivered a determined performance, dominating and knocking down his preliminary opponent only to be inexplicably robbed of victory by the judges. The two represented Uppercut Gym of Minneapolis, MN very well, demonstrating the degree to which so-called White Collar Boxers can develop in the pugilistic art while evincing great potential to win the Ringside Championships in the future. 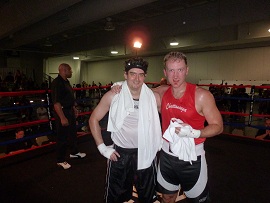 Keck, who weighed 195 pounds the firstday of the tournament and 197 for both the semi-finals and finals, was forced to fight boxers weighing well over the 201 pound heavyweight limit because Masters Division rules allow for more leeway in order to seat a full tournament in each weight division and experience level. Against his first opponent he scored a knockdown in both the first and third rounds, the latter coming from a solid left jab, causing the referee to stop the contest. In the second match Keck faced a boxer from Georgia who was competing out of Tennessee. This opponent was tall, heavy and strong. In the corner before the third and final round we were concerned that Keck was behind on points. He was instructed to land combinations and punch with determination as the bell rang and his Uppercut Gym teammates cheered him on. In the latter part of the round Keck landed a solid right hand that caused the referee to stop the fight and call the ringside doctor to examine the man. It turned out that Keck had broken his opponent’s nose and the fight was stopped, advancing “The Big Jump” into the finals to fight for the Ringside Championship belt.  Keck fought hard in the last match against a man weighing 207 pounds. Although it was close, John “The Big Jump” Keck lost a decision, earning the 2nd place medal at his first ever Ringside International Championships boxing tournament. 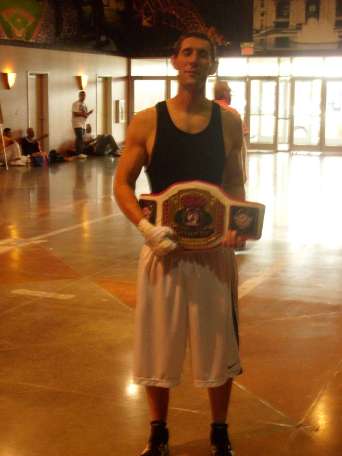 During the first week of August Ringside Products held its 10th Anniversary amateur boxing tournament. Competing as a Heavyweight in the Masters Division for the second year in a row was Ryan Sheahan of Minneapolis. A computer consultant orginally from Chicago, IL, Ryan has trained under me since June, 2009 and is featured in the above video advertising my personal training business. He asserts in the end of his testimony that, after having finished in second place last year, he was going to work hard with me and win it this year. He did. He defeated last year’s champion with a 3rd round stoppage in the semi-finals and won a decision in the finals, bringing home his first Ringside belt. Congratulations to Ryan Sheahan! Video coverage of his victories should be posted soon.