Abell and Butler both lighter as tonight’s card is set

Joey Abell weighed in at 241 pounds last night at the Target Center for his Minnesota State Heavyweight Championship fight against Raphael Butler, who weighed 259. While Abell, who reported he was training hard and would be superbly prepared for this fight, is four pounds lighter than in his last one, Butler arrived at a full 20 pounds lighter than he was for his easy 2nd round knockout of Marcus Rhode on September 12. Whether he’s trimmed down enough and prepared for the long haul against Abell remains to be seen, but his contention that he was training hard appears to be accurate. Still, from outward appearances he looks like he could use more conditioning to augment his high level of skill, and while conventional wisdom would give him the nod endurance will be a question if the bout goes beyond round 5.

This coverage brought to you by:  Schmidty’s Sports Barbers 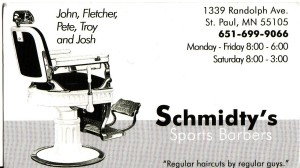