On Saturday, December 3, 2016, Emmett Joseph Yanez died. He taught me to box when I was 10 years old and was a presence in my life for 37 years. I knew that when he died it would hit me hard, but it hurt a lot more than I expected. 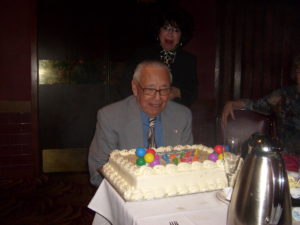 Emmett’s death came, to the day, exactly three months before his 97th birthday. Sure, you can’t complain that someone died too early when he lived 96, almost 97 good years, but that doesn’t make it any easier for his wife, family, and those of us who love him and anyway, it’s still too early. Yes, these last couple of years he had dementia and yes, especially this last year he suffered terribly. But all of his years, including the suffering years, were good. I look at the years and feel some guilt for not visiting him enough but I did visit him and was trying to see him, especially in the nursing home, when the normal slings and arrows of life employed themselves against me. The last time we talked was the Wednesday before the week of Thanksgiving. Sitting in the T.V. room of the Maplewood Care Center, me in a lounge chair and him in his wheelchair, in spite of dementia, he was still calling me by my name. I gave him a hug and told him I’d be back soon, that I was going to come there together with his wife, Sylvia.

That and “How are your mom and dad” are things he repeated numerous times in the same conversation ever since getting dementia, because he often forgot he’d said those things already. But even if it was rote repetition it was a part of who he was, a man who cared about you, made you feel important, let you know that he was your coach in Boxing and all of life, always in your corner.

I was speaking with my spiritual director, a Sister of St. Joseph of Carondolet, just over two months since Emmett’s death, telling her how I knew he wanted to teach me some things 30 years earlier when he had to step away from boxing to care for his dying wife, Natalie. I knew it frustrated him not to be able to help me achieve my full potential as a fighter when I reached adulthood and I knew it frustrated him not to develop other young men who had great potential. I knew it frustrated him even more when fighters let him down, giving into the temptations of loose women and the night life, because that kind of behavior is throwing a gift back into the face of God. But this Sister helped me see in our conversation the great lesson of Emmett’s life, the sacrificial nature of his love that models the patron of his middle name and obeys the instructions of the child raised by St. Joseph.

Born in Texas on March 3, 1920 to Mexican parents, Emmett was one of 12 children. He was among the first four, all boys, followed by a combination of 4 boys and 4 girls. By age 10, when 4th grade was behind him, Emmett dutifully quit school for agricultural labor with his family, picking cotton for a living. Less than a year later, his family moved to St. Paul, Minnesota, where they took up residence in a Mexican community under the Third Street (Kellogg) Bridge connecting the Eastside to downtown. They eventually moved to the Mexican community on the West Side Flats. Like other ethnic groups—the German Jews, the Irish, the Swedes, the French and the Italians—Mexican immigrants lived in these communities of St. Paul and built it into the city of today. Emmett’s family worked picking sugar beets in the outlying areas beyond the city. Emmett got the chance to start boxing by age 17, was a St. Paul Golden Gloves champion and wanted to fight professionally between the bantamweight and featherweight divisions. But just after marrying Natalie, at age 21, he had four days alone with her before heading out with the 82nd Airborne Division of the U.S. Army to the European Theater of World War II. A part of the Normandy Invasion, Emmett served in five major campaigns and was awarded the Bronze Star for valor. Upon his return, he fought four times as a featherweight, winning one and losing three, then became a trainer.

“I went pro after the war,” he told my mom and dad in 1984 when we stopped for coffee on the way to Marshalltown Iowa where I qualified for the National Junior Olympics. “But I was all washed up.”

He was admitting to us then, in his 50s, what he’d admitted to himself in his mid-20s, that his dreams had to change, that circumstances had interrupted his plans, that he had a God given responsibility to take care of his wife and family. So instead of continuing a career as a professional fighter, he became a trainer. He worked for the city of St. Paul in the Department of Public Works repairing lights on bridges. It was a dangerous job requiring him to climb high over the Mississippi River as well as areas where he could have fallen to hard concrete or tar covered ground. It was important work serving regular people who mostly never gave a thought to the men risking their lives to keep them safe. It was a humble position, the occupation of a man full of gratitude who did what was necessary without complaint. When his shift was over every day, Monday through Friday year-round, he made his way to the Mexican American Boxing Club where he would train young boys like me and older boys and young men who dreamed of being better, who needed guidance into responsible manhood, many of whom would have gone to early graves or wasted lives without him. Just like anyone who coaches amateur boxers Emmett wanted to develop winners and he developed many of them. He produced national champions and some professionals, the last of whom, Robert Brandt, is now ranked among the top three middleweights in the world. By my senior year in high school, Emmett had to stop coaching for a while. His protégé, three time Upper Midwest Golden Gloves champion Bobby Zamora who also grew up picking sugar beets, took over as my coach and was in my corner when I won the Upper Midwest Golden Gloves lightweight title and went to the National Golden Gloves. The reason Emmett stopped coaching was because Natalie had a stroke, and he took care of her from 1987 until her death in the spring of 1993. In 1992 he told me how he knew I had potential but he just didn’t have the time to teach me certain things I needed to learn to go farther. That was a major regret to me, as well as to him.

Yes, the good Sister who gives me spiritual direction told me, but what a beautiful sacrifice he made, taking care of his wife, keeping the commitment he made before God when they were married. That’s what God called him to and it’s nothing to be bitter about as his fighter and it’s an example to follow. The commitment Natalie made to him, being a faithful wife and good mother, is also a good example of the kind of faith to which we are all called. She loved him so much that before she fell into the depths of senility she constantly told him, “Emmett, when I die you have to get married again because you need someone to take care of you.” She told him many times, “I’m going to think of someone for you to marry when I’m gone.” One night, when they were going to bed, she finally had the revelation, telling him, “I know who you should marry; you should marry Sylvia.” What love she had, both for Emmett and her great friend, Sylvia, who’d been a bridesmaid in their wedding. As depressed as he was and climbing the walls with loneliness, a few months after Natalie’s death Emmett called Sylvia, who was living in California. By 1996 they were married, and Sylvia, at 91, was at his bedside when God finally called him home.

Both of Emmett’s marriages, his commitment to his family, to his children, grandchildren and great grandchildren, were an even greater calling than his commitment to his fighters. But his fighters love him as a father or grandfather and respect his family in a special way. It dawned on me on December 8, the Feast Day of the Immaculate Conception of Mary and the day of his wake, that Emmett had been a grandfatherly figure to me. I realized how when I was ten years old, nearly to the day, I’d met Emmett one year after my maternal grandfather who was also a World War II combat veteran, died. Emmett had replaced him, all these years, for me. He hadn’t done so consciously and I never thought of it until I was about to leave for his wake, but he was another American who fought for our country who was there for me in my boyhood to teach me about simple manhood, about disciplining myself and doing what needed to be done on a daily basis to face my fears and grow into manhood. He taught me to fight through my fear and fight through pain and to accept responsibility. All these observations about Emmett Joseph Yanez exemplify how he did in fact live up to the patron of his middle name and did in fact obey the instructions of the child raised by St. Joseph.

Finally, Emmett’s final days, surrounded by his wife and family and some of us fighters as he lay in bed with a rosary and scapular around his neck, also mirror the life of the patron of his middle name. St. Joseph is the patron saint of a happy death because of course he had the two most wonderful people with him when he died, our Mother the Blessed Virgin Mary and Jesus Christ. In the Bible he never said one single word but cared for the Mother of God and protected the Word Incarnate, saving Him from murder in the flight to Egypt and teaching Him carpentry and the building trades, quietly doing his job and following the will of God the Father. Humble, quiet, gentle, strong, and tough, Emmett Yanez shaped boxing in St. Paul and greatly influenced it in the state of Minnesota while serving his neighbor, his country and his God. He is a true image of all that is good in the American man. All of us who knew him are profoundly fortunate for having encountered his presence in our lives. All who encounter us are greatly blessed in whatever shred of his influence rubs off on them.