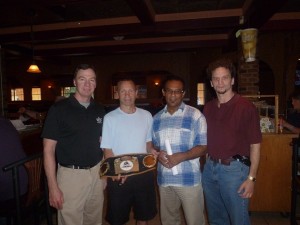 On Saturday, June 16, Boxers and Writers Magazine and Minnesota boxing community members gathered together with former IBO Junior Welterweight Champion Mike Evgen and world class trainer Dennis Presley at Ol Mexico restaurant in Roseville, MN to watch Julio Cesar Chavez, Jr. successfully defend his WBC Middleweight title against Andy Lee. It was a good fight with both putting a lot into it, but of course Chavez was just way too much for Lee, who said in the immediate post-fight interview that his punches just had no effect on the Mexican champion. Lee had boxed and moved well and landed good shots in the first two rounds, but Chavez was just too strong and relentless in his attack and his punches were two powerful. Chavez defeated the Limerick, Ireland native by seventh round TKO. Chavez was ahead on all cards 58-56 at the time of the stoppage.

Joining the party to watch the fight, which was broadcast on HBO from the Sun Bowl in El Paso, TX, were longtime members of the Minnesota boxing community, including former UPI boxing writer Dennis McGrath, as well as his good friend Jack Flagler, former coach at the University of Minnesota boxing gym and longtime law professor. There were also boxing enthusiasts from Uppercut Gym in Northeast Minneapolis as well as a few Masters Division amateurs who train there, including Ringside International Light Heavyweight Champion Steve McComas of St. Paul, 2010 Ringside Heavyweight Champion Ryan “The Chicago Shillelagh” Sheahan, 2011 Ringside heavyweight runner-up John “The Big Jump” Keck, and middleweight Rick “The Deadline” Lundstrum. More parties to watch world class fight broadcasts will be planned by Boxers and Writers Magazine for the future.