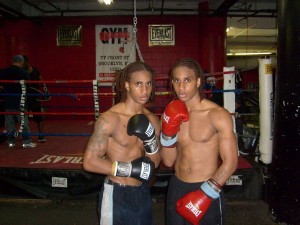 Deano ‘Bad Newz’ Burrell of New York won his professional boxing debut on November 12 in a Lightweight bout at Schuetzen Park in North Bergen, New Jersey. He scored a 2nd round TKO over John Passantino, 134, who was also making his professional debut. Burrell, a Southpaw, is being developed along with his twin brother, Scott, by world class trainer Hector Roca. Deano and Scott are identical twins except for one small difference; Scott is right handed.

At Gleason’s gym in September Roca explained that he’d been training these two since they were kids. Deano and Scott were born in New York to Jamaican parents who took them and their siblings to London when work opportunities opened across the water. But they periodically traveled in their teenage years back to New York in order to train with Roca as they pursued their amateur careers. They graduated from Roe Hampton University in London, both earning Business and Sports Science degrees. Scott, whose nickname is ‘Spade Ace,’ intended to fight on the same card as his brother, but his match fell through.

Being an educated pair, the two were glad to name their favorite book, respectively, for Boxers and Writers Magazine. Interviewed separately during alternate breaks from their workouts, each of them named the The Autobiography of Malcolm X, written with Alex Hailey, as their favorite book. Each said they didn’t necessarily agree with everything in the book, but they found it quite insightful, informative, and inspirational.

To learn more about their favorite book and also for the opportunity to purchase it, click this Amazon link.