Portrait of the Artist as a Boxing Man 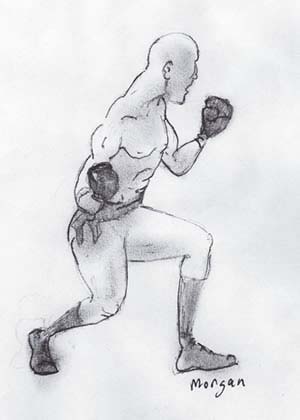 “Irish” Danny Morgan began boxing at a very young age. Most fighters who go far do. Coming from a family of 12—including five brothers and six sisters—he grew up in an environment that encouraged competitive athletic development. After all, a lot of siblings means a lot of rough-housing, and when it comes time to compete in sports there are plenty of family members to cheer you on. Also, his father, Jim Morgan, was a professional wrestler and a boxer who eventually ran boxing gyms in Richfield and Minneapolis.

Another gift passed down to Danny Morgan was the value of intellectual development, particularly in the area of art and literature. So when he wanted to get away from the noise and commotion of a crowded house, he’d retreat to his room to draw. There he came up with humorous cartoons, some centered in the theme of boxing, others concentrating on family and Irish culture. When he grew up to become a professional boxer and serve in the United States Military, he continued developing his artistic talents. By his mid-twenties, when he began fighting professionally, he’d compiled a significant portfolio of drawings, occasionally securing publication for some of them in newspapers and magazines around the country.

The public normally only sees the raw heart of the fighter in the ring, respecting him as a skilled and dangerous combatant.

But throughout the world there are boxers with tremendous creative talents, and Danny Morgan celebrates his every time he picks up the drawing pen.

“I was just a pretty decent club fighter,” Morgan modestly insists, “so we hit the road all the time with a lot of club fights a year, and that’s how we got to have so many fights.”

Morgan did a stint in the United States Marine Corps shortly after high school, and after the terrorist attacks of September 11, 2001, he joined the Army National Guard. 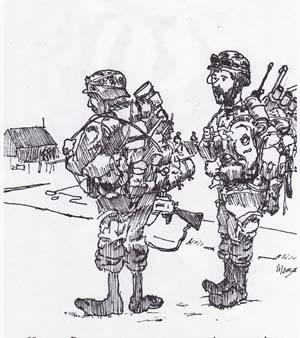 “I thought I’d just do my part,” Morgan says. “So now we’re going to Iraq. Everybody does their duty, does their job, and it’s just my turn to do my duty.” Sometime in the coming months he will be among National Guard support troops heading to Iraq for one year. His cousin, Eric Knode [a Morgan on his mother’s side], who is appearing with The Bogside Boxers in the 2008 St. Paul Irish Fair Boxing Exhibition as Ryan “The Hook” O’Neal, recently returned from Iraq with a group from the same National Guard unit. Patriotic Americans, the two of them are part of a cultural tradition of descendants of Ireland fighting for nations around the world known as The Wild Geese. The history dates back to the Treaty of Limerick in 1691, which involved 20,000 Irish troops departing for France under the belief that British leaders would respect the rights of their countrymen. Instead the people of Ireland got the Penal Laws, which not only outlawed Catholicism and the Irish language, but ushered in discrimination against Presbyterians and non-Anglican Protestants, resulting in centuries of more emigration. Like the descendants of Ireland before them who have served in various nations’ military forces, but especially in America’s, they are brave Wild Geese in the truest sense of the term. 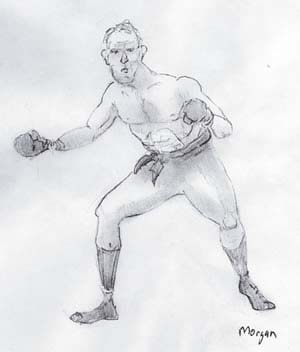 Danny Morgan will honorably exemplify The Wild Geese in the coming year, but during the 2008 Irish Fair, he and all of The Bogside Boxers will embrace the Irish heritage so proudly flowing with the Mississippi River through the heart of Minnesota’s Capital City on Harriet Island.

“This whole exhibition was started in recent years when I suggested to the Irish Fair that we put on a boxing play,” Morgan says with a mischievous laugh. “They just didn’t know that during this play we actually hit each other. So they freaked out about it a little bit . . . but how else do you act in boxing?”
For further information on the saga of The Wild Geese, visit The Wild Geese.

by
Mark Connor
(Published August 8, 2008 for the Minnesota Irish Fair)